Student Loan Debt Holding Back Majority of Millennials from Homeownership 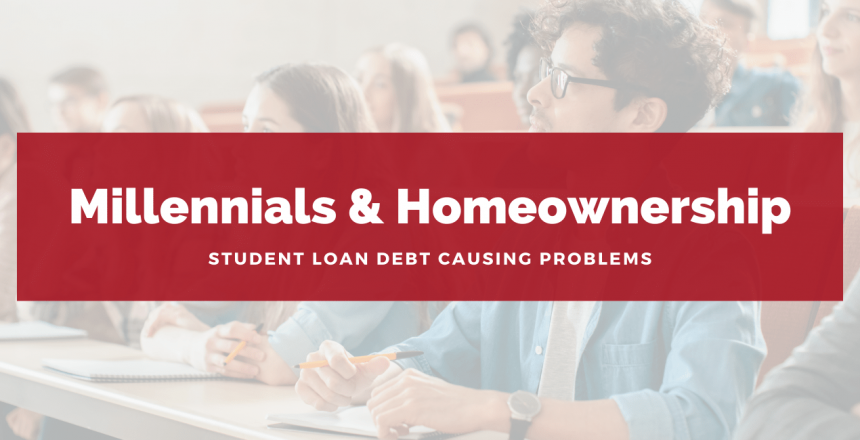 Welcome back to iLeads Mortgage Market Minute, where we bring you the latest, most relevant news regarding the mortgage market. We hope you enjoyed last week’s edition where we talked about Mortgage Applications Continue Downward Trend. This week we’re bringing you:

The Treasury Department and FHFA announced Tuesday that they are suspending certain requirements that were added in January to the Preferred Stock Purchase Agreements (PSPAs) between Treasury and Fannie Mae and Freddie Mac.

Under those requirements, Fannie Mae had restricted its acquisition of loans secured by second homes and investment properties to 7% of its total single-family acquisitions and applied stricter underwriting to those loans.

Treasury’s statement on the suspension sought to clarify its reasoning for the change.

“The suspension of these PSPA requirements recognizes that FHFA has the authority and responsibility for the Enterprises’ safety and soundness and to foster housing finance markets that support sustainable homeownership, and is not intended to stimulate aggregate housing demand given current conditions in the housing market,” the Treasury stated in a Tuesday afternoon press release.

“Home prices have been accelerating rapidly, with the annual rate of national home price growth at multi-decade highs,” the Treasury release continued. “A principal challenge for the U.S. residential housing market today is inadequate housing supply. The Administration is focused on promoting housing stability, which includes advancing housing policies that can sustainably increase the stock of affordable housing units for rent and ownership.”

Lenders and trade group officials raised strong objections to the changes, which were made a week before the Trump administration left office. Objectors noted that the 7% PSPA cap had caused disruptions, particularly since a key provision required a 52-week look-back.

They also complained that the restrictions on the cash window would force lenders to send mortgage-backed securities to the private market, fattening Wall Street’s coffers.

In a March letter to the Treasury, the Mortgage Bankers Association stated: “It is not clear that private market participants currently have the capacity or resources to absorb the entirety of the gap between the Enterprise limits and the volume needed to satisfy underlying demand.

Real estate startup Pacaso announced Tuesday that it has raised $125 million in its recent Series C funding round, giving it a $1.5 billion valuation.

This announcement comes less than six months after the company raised $75 million, bringing its total amount of capital raised to $215 million. Earlier this year it secured $1 billion in debt financing, making it the fastest U.S. company to achieve unicorn status.

Pacaso launched its platform in October 2020 with the goal of “democratizing second-home ownership.”

The company claims to already have an annualized revenue run rate of $330 million. In addition, the company says it currently manages nearly $200 million in real estate.

The platform’s unique co-ownership model, which is made possible through the creation of property-specific LLC’s, was the brainchild of former Zillow executives Austin Allison and Rascoff. Pacaso’s goal is to reduce the headache and cost of second home ownership, while permitting them the flexibility to rent the property out.

While it may seem like a similar concept to a timeshare, Pacaso focuses on bringing together a group of eight or fewer co-owners to purchase shares of a single-family home, which they have access to throughout the year.

Student Loan Debt Holding Back Majority of Millennials from Homeownership*

WASHINGTON (September 14, 2021) – Sixty percent of non-homeowning millennials say student loan debt is delaying their ability to buy a home, by far the most affected population, according to a new poll released today by the National Association of Realtors®.

The findings also show that Americans burdened with high student debt see the impact on their daily lives. They often must choose between investing in their retirement, purchasing a home, getting married, starting a family, or general savings.

“Housing affordability is worsening, leaving future home buyers with student debt at a severe disadvantage,” said NAR President Charlie Oppler, a Realtor® from Franklin Lakes, N.J., and the CEO of Prominent Properties Sotheby’s International. “Younger Americans shouldn’t have to choose between education and homeownership, and NAR continues to pursue policies that ensure the American dream remains available and accessible for those still paying off their college education.”

The new research also uncovers that only 23% of student loan debtholders understood the costs of attending college before taking out loans. Moreover, 35% of those student loan debt holders did not fully understand their potential for earnings following graduation.

“Aside from just purchasing a home, this report finds that more than half of those with student loan debt have delayed some form of major life choice,” Oppler continued. “Student loan debt isn’t just seeping into housing affordability. It’s also plaguing other aspects of people’s lives.”