Mortgage applications for new home purchases dipped by 15.2% year-to-year in October, according to a monthly builder survey published by the Mortgage Bankers Association this week. We hope you enjoyed last week’s edition where we talked about Borrower Creativity Helping to Holding Delinquencies Down. This week we’re bringing you:

Trade group expects $160 million in operating reserves by year’s end, as they step up legal fight

In the first nine months of this year the National Association of Realtors (NAR) has collected $229.6 million in membership dues from 1.542 million members, who are mostly real estate agents and brokers.

About 523,000 members have additionally donated a total of $39.5 million to the Realtors Political Action Committee.

These revelations were released Monday at NAR’s Board of Directors meeting in San Diego, which punctuated the NAR’s six-day long annual conference.

The meeting comes as NAR is at war with the U.S. Justice Department’s antitrust division.

At this time last year, federal antitrust officials reached a consent decree with NAR. However, DOJ withdrew from the consent decree in July, stating it wished to pursue a broader investigation into real estate commissions. The decision infuriated NAR, which filed a petition in Washington D.C. federal court that DOJ exceeded its civil investigative demand powers.

The standoff colored a meeting of NAR’s over 800 board of directors. One board member asked how much of the dues go to legal defense.

“That’s one of the reasons we’re boosting the reserves,” responded NAR Treasurer Nancy Lane, “to fight that.”

Lane, who is a real estate agent in Brandon, Mississippi, added that what NAR is paying to specifically fight DOJ “Is not a line item in the budget.”

The Board of Directors approved measures regarding information in home listings, which were previously adopted by the Multiple Listings Services policy committee. Three of these measures – that a buyer agent’s expected compensation be disclosed, that MLS search results cannot be sorted based on commission compensation, and that buyer’s agents cannot imply they represent consumers for free – were each part of the scotched consent decree.

The National Association of Home Builders (NAHB) said builder confidence in the new home sales market increased in November for the third consecutive month despite the many challenges builders are facing. The NAHB/Wells Fargo Housing Market Index (HMI) rose 3 points from its October level to 83. 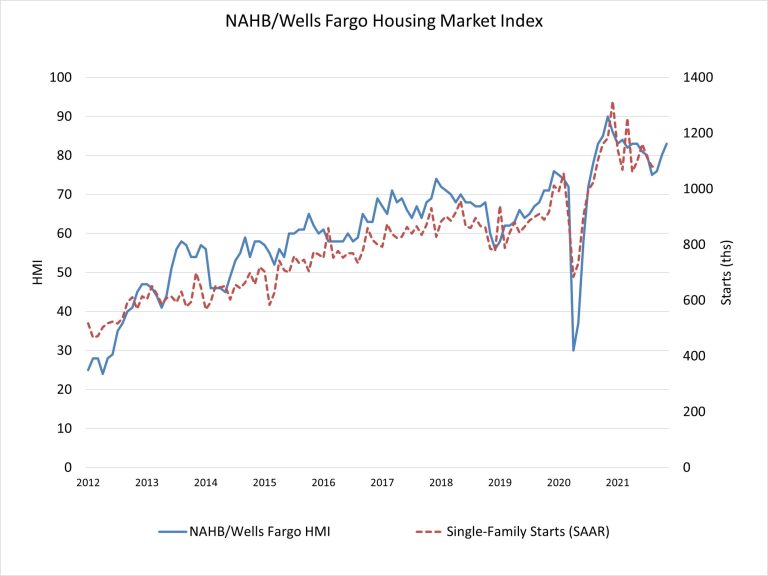 Mortgage applications for new home purchases dipped by 15.2% year-to-year in October, according to a monthly builder survey published by the Mortgage Bankers Association this week.

However, on a month-to-month basis, activity was actually 6% higher in October than in the month prior. The strong monthly gain puts MBA’s estimate of new home sales at its strongest pace since January 2021, the report said.

Joel Kan, associate vice president of economic and industry forecasting at the MBA, noted in a statement that purchase activity in October was dominated by higher mortgage loan balance transactions, pushing the average new home loan size over $412,000—a record in the survey.

In September, the average mortgage loan size of new homes clocked in at $408,522, the survey found.

“Recent U.S. Census data show an increasing share of new sales are for homes yet to be built or still under construction, and a shrinking share of completed homes,” Kan said. “Housing demand remains strong, and buyers are making quick decisions in a still very competitive market.”

Kan also noted that homebuilders continue to face delays and challenges from “supply-chain bottlenecks and rising costs.” Continued material and labor shortages have made many homebuilders delay putting newly constructed houses up for sale.

“Overall construction costs, as measured by the Producer Price Index (PPI), recorded an annual increase of 12.3% in October, which is almost five times the average annual change,” he added.