Welcome back to iLeads Mortgage Market Minute, where we bring you the latest, most relevant news regarding the mortgage market. We hope you enjoyed last week’s edition where we talked about Mortgage Rates Finally Catching a Break. This week we’re bringing you:

Can you smell it in the air? America is back! The last plank required to complete the foundation of my “America is Back Economic Recovery” model was for the 10-year yield to start trading in the range of 1.33% to 1.60%, and as of Feb. 16, this has happened. Higher treasury yields have pushed mortgage rates higher, but will higher rates cool the housing market? 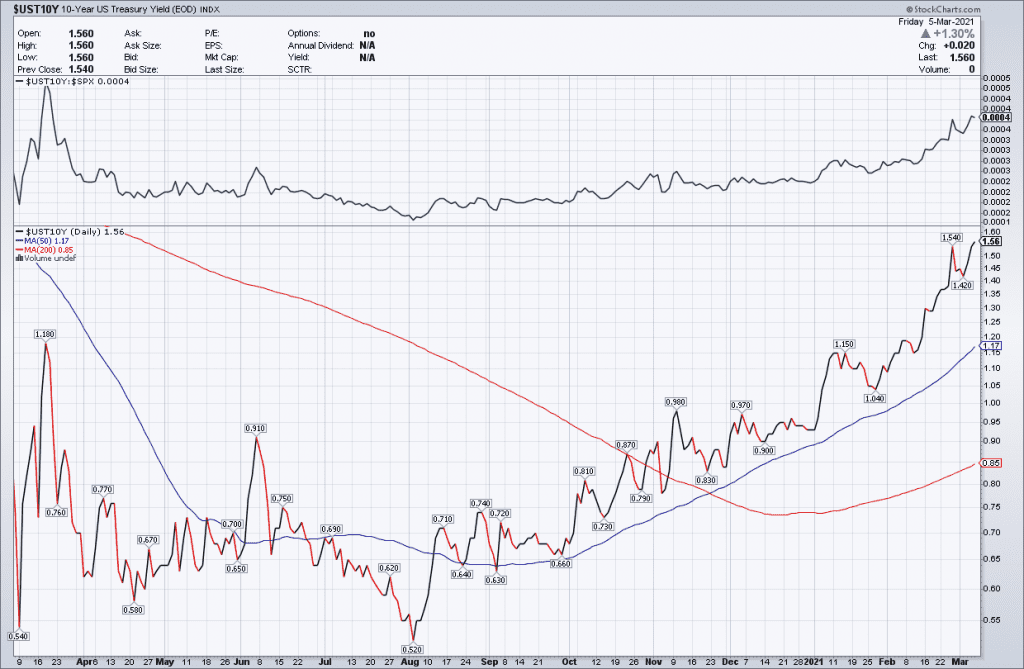 We are currently administering three different effective and safe vaccines and are on the brink of reopening our economy. Added to this, the now high savings rate will likely go higher when the next stimulus checks are delivered.

Over the weekend, the Senate passed the 1.9 trillion disaster relief package, which will go back to the House of Representatives for a vote on Tuesday. We are looking at $1,400 checks being sent, six months of pandemic unemployment insurance, rental assistance, and many more disaster relief items.

Fannie Mae’s Home Purchase Sentiment Index (HPSI) declined slightly in February as did four of its six components. The Index, based on a sample of answers to the company’s monthly National Housing Survey, dipped 1.2 points to 76.5. It is down 16 points from its level in February 2020.

Consumer sentiment soured significantly on the question of whether it is a good time to buy a house. Forty-eight percent of respondents called it a good time and 43 percent a bad time for a net positive of 5 percent. This is down 10 points compared to January and 23 points lower year-over-year.

Attitudes toward selling a home fared a little better. Those who say it is a good time to sell decreased from 57 percent in January to 55 percent, while the percentage who say it’s a bad time to sell increased from 33 percent to 35 percent. This left a net 20 percent who said it was a good time, a 4 percent downturn for the month, and 25 percent lower than a year earlier.

Few respondents see interest rates declining further, the net who expect lower rates was a negative 39 percent, down 3 points from the prior month. The net of those reporting a higher income over the previous 12 months also turned negative, with 17 percent reporting an increase and 19 percent lower income. The remainder reported no or little change.

The two questions that netted gains, however, did so decisively with a 5 percent net positive increase in those who expect home prices to go up (47 percent) against those who expected a decline (18 percent). This net, however, was 10 percent lower than in February 2019.

Eighty-two percent of respondents said they were not concerned about losing their jobs while 17 percent said they were. The net of 65 percent who were unconcerned was a 14 point monthly increase although it was down 7 points from the net positive number before the pandemic emerged.

Fear not, experts say – better days are ahead.

Overall, the HPSI hit 76.5 last month, down from 77.7 in January. A small drop was expected, according to Fannie Mae Senior Vice President and Chief Economist Dave Duncan, but housing market confidence should be reflected in the coming months.

Duncan said the likelihood of COVID-19 lockdown restrictions easing as vaccination efforts ramp up, combined with the forthcoming warmer weather and another round of fiscal stimulus checks, will give consumers good reason to feel more confident about the labor and housing markets.

“However, other components of the index remain well below pre-pandemic levels, so we believe there may still be room for improvement in housing and economic attitudes in the coming months, depending in part on the future path of mortgage rates,” Duncan said.

Borrowers remain relatively pessimistic on the state of home prices, as the HPSI reported 47% of respondents expect home prices will go up in the next 12 months – up from 41% last month. Those who believe prices will go down increased for the second straight month, this time from 17% to 18%.

A larger percentage of HPSI respondents now believe mortgage rates will go up as well, from 45% to 47%. They were correct, as rates climbed above 3% for the first time since July.

Since reaching a low point in January, mortgage rates have risen by more than 30 basis points as the economy works to recover, and according to Sam Khater, Freddie Mac’s chief economist, the impact on purchase demand has been noticeable.

Last year was a record setting one when it comes to mortgage origination according to Black Knight’s January Mortgage Monitor. It puts the total volume of originations during 2020 at $4.3 trillion, the highest in the company’s records. Refinance originations, to no one’s surprise were also at an all-time high of $2.8 trillion and $1.5 trillion in purchase loans was originated, the largest annual volume since 2005. The fourth quarter also made history with all-time single quarter highs for purchase mortgages at $346 billion and refinancing at $869 billion. In total, $1.3 trillion worth of mortgages were originated during the quarter.

Even though the record low mortgage interest rates, which paved the way for such a spectacular year, have been rising in recent weeks, Black Knight says 2021 at least got off to a promising start. The company examined lock activity through the middle of February and says, assuming a 45-day lock to close timeline, first quarter refinance activity can be expected to remain at those late 2020 levels. Purchase locks in the first half of February were up 6 percent compared to January and 37 percent year-over-year while refinance locks in that early February period edged back by about five percent from January but were still more than double the volume of that same two-week span in 2020.

Black Knight says it expects impacts from the rising rates to begin late in this quarter or early in the next. The 30-year conforming rate has increased 35 basis points since the first of the year, 25 basis points in the last two weeks alone.

With those rising rates, there has also been a drop-off in high-quality refinance candidates. As of March 4, with Freddie Mac reporting a rate of 3.02, the refinance pool is at 12.9 million potential borrowers. This is down from 18.1 million on February 11, a 29 percent decline in just three week and the smallest that population has been since May 2020.

The sun is shining as I write this today and the forecast is for warmer weather. While others might think of restarting outdoor activities or working in the garden, our industry is gearing up for a strong spring housing market – and the first step in what MBA is forecasting will be a record-breaking year of purchase origination volume.

Demand for homes will be bolstered by an improving job market, favorable demographic trends, and mortgage rates that, while rising, are still low from a historical perspective. The unemployment rate, which was at 6.2% in February, is expected to drop to 4.7% by the end of the year, with hiring accelerated by a surge of consumer spending as pandemic restrictions are lifted.

Another positive sign impacting MBA’s housing market forecast: more than 15% of the U.S. population has received at least one vaccine dose at this point, and recent announcements from the Biden administration indicate that the pace will only increase from here.

The improving economic picture is putting upward pressure on mortgage rates, which have moved above 3% in recent weeks for 30-year fixed-rate loans. MBA is forecasting that the Freddie Mac survey rate will reach about 3.5% by the end of 2021. I am asked this a lot and it’s important to remember: Freddie Mac’s weekly rate only includes purchase loans – not refinances and the accompanying cost of the current adverse market fee.

So long as rates stay in this neighborhood and do not quickly climb above 4%, potential homebuyers will likely not be dissuaded by the modest increase. Meanwhile, refinance demand will certainly cool as the year progresses.