Mortgage applications rebound in new year after a sluggish December

Consumers reacted in a big way to falling interest rates as mortgage applications increased 23.5% from one week earlier, according to the Mortgage Bankers Association. This week’s results include an adjustment for the New Year’s Day holiday.

The MBA’s Weekly Mortgage Applications Survey for the week ending Jan. 4 found that the refinance index increased 35% from the previous week. 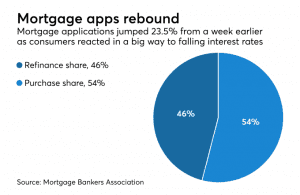 The refinance share of mortgage activity increased to its highest level since February 2018, 45.8% of total applications, from 42.7% the previous week.

“Mortgage rates fell across the board last week and applications rebounded sharply, after what was a slower-than-usual holiday period. The 30-year fixed-rate mortgage declined 10 basis points to 4.74%, the lowest since April 2018, and other loan types saw rate decreases of between 9 and 20 basis points,” Joel Kan, the MBA’s associate vice president of economic and industry forecasting, said in a press release.

“This drop in rates spurred a flurry of refinance activity — particularly for borrowers with larger loans — and pushed the average loan size on refinance applications to the highest in the survey (at $339,800). The surge in refinance activity also brought the refinance index to its highest level since last July.”

Adjustable-rate loan activity increased to 8.4% from 7.6% of total applications, while the share of Federal Housing Administration-guaranteed loans increased to 10.3% from 10% the week prior.

The share of applications for Veterans Affairs-guaranteed loans increased to 11.6% from 11% and the U.S. Department of Agriculture/Rural Development share remained unchanged at 0.6% from the week prior.