Welcome back to iLeads Mortgage Market Minute, where we bring you the latest, most relevant news regarding the mortgage market. We hope you enjoyed last week’s edition where we talked about U.S. Homeownership Rate Soars To An Almost 12-Year High. This week we’re bringing you:

A digital closing expert weighs in

Many lenders are thinking about digital closings in a way that’s preventing them from achieving the ROI they want. Many have been solely focused on Remote Online Notarization (RON), since RON is seen as the quickest solution to the immediate challenges that COVID-19 has created.

However, as lenders try to conduct business remotely and keep up with high loan volumes while switching from fully paper closings to completely digital RON closings, they experience firsthand how difficult this is. My goal here is to provide helpful guidance on how lenders can implement a successful digital closing strategy that goes beyond RON and addresses current pain points and long-term goals. You’ll be able to create a plan that works in any environment and scales digital closings quickly.

Lenders need to have a digital closing strategy that’s successful in any environment and in every state, regardless of the speed with which individual states and stakeholders adopt new technology or change their policies. After onboarding dozens of lenders, we’ve learned that there are two concepts that are fundamental to success. Read more in-depth here.

More Home Buyers are in the Market, but Shopping Takes Longer*

In the second quarter of 2020, 11 percent of American adults were planning on purchasing a home over the next 12 months, and of those, almost half were actively engaged in doing so. Rose Quint, writing in the National Association of Home Builders’ (NAHB’s) Eye on Housing blog says that the 49 percent who were actively shopping was significantly higher than a year ago when 41 percent were in the game but was identical to the share in Q1. Quint says this suggests that the COVID-19 crisis and its accompanying record-low mortgage rates have converted some prospective buyers into active buyers.

The share of buyers who were actively looking versus thinking about it differs significantly by age group. Of Millennials planning a home purchase in the next year, 57 percent are already actively looking but among Boomers, that share is only 37 percent. Among Gen Z and Gen X buyers the share who were active was 40 percent and 47 percent, respectively. Regionally those in the Northeast are the most likely to be actively engaged in the purchase process (57 percent), compared to 44 percent in the Midwest, 45 percent in the West, and 50 percent in the South. Read more in-depth here.

Record-low interest rates are helping home buyers lock in years of savings on future mortgage payments. But those searching for larger homes or in expensive markets aren’t reaping the same rewards.

Construction spending held firm in June, inching down fractionally from the May level and increasing a bit compared to June 2019. The U.S. Census Bureau said total spending during the month was at a seasonally adjusted annual rate of $1.355 trillion, down 0.7 percent from the $1.365 trillion spending rate in May. On an annual basis the rate was up 0.1 percent.

Privately funded construction expenditures were also down 0.7 percent month-over-month at a rate of $1.002 trillion compared to $1.009 trillion in May. The June rate was 1.9 percent lower on an annual basis. Read more in-depth here.

The U.S. needs a national strategy to suppress the virus, Kashkari says on Face the Nation

A member of the Federal Reserve’s rate-setting Federal Open Market Committee said on Sunday that the only way to secure a robust economic recovery is to lock down the country again and reopen with a focus on testing and tracing.

The current path, which has state and local governments dealing with the virus in a patchwork fashion, will suppress economic growth for a year or more and lead to an increase in bankruptcies, according to Neal Kashkari, president of the Federal Reserve Bank of Minneapolis, who appeared on CBS’ Face the Nation.

“If we were to lock down hard for a month or six weeks, we could get the case count down so that our testing and our contact tracing was actually enough to control it the way that it’s happening in the Northeast right now,” Kashkari said. “That’s the only way we’re really going to have a real robust economic recovery.”

The U.S. death toll from COVID-19 passed 155,000 on Monday, according to Johns Hopkins University data. The U.S. has 4.7 million confirmed cases of the virus, about half of them occurring during July. The number of cases in America is almost double the number in Brazil, the country with the next highest number of infections. Read more in-depth here.

The last report from Freddie Mac put its 30-year fixed rate mortgage (FRM) at 2.99 percent, up 1 basis point from the all-time low. Black Knight, in its new Mortgage Monitor, says that has made home affordability the best in four years. As of mid-July, it required only 19.8 percent of the nation’s median monthly income to make the mortgage payment on an average priced home using that 30-year FRM and a 20 percent down payment. That is more than 5 percent below the average over the 1995-2003 period. The required monthly payment, $1,071, is 6 percent less than last July despite an average $12,000 increase in home prices over that same period. 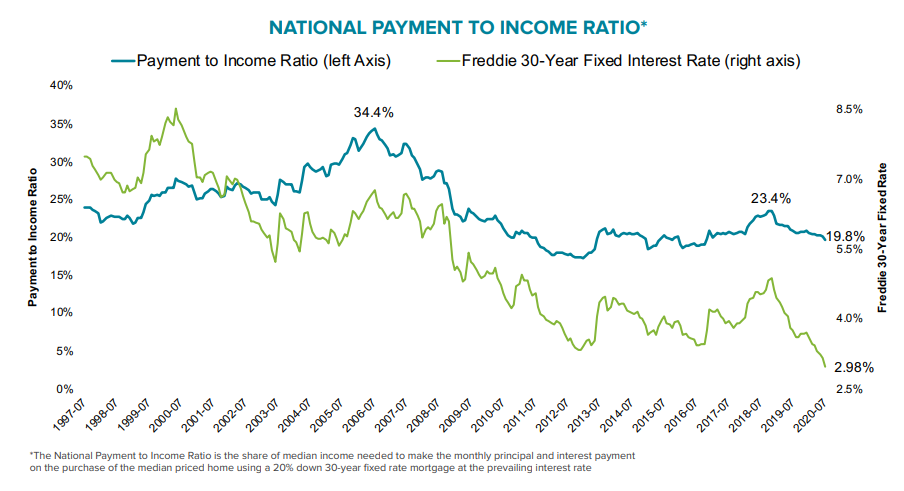