Welcome back to iLeads Mortgage Market Minute, where we bring you the latest, most relevant news regarding the mortgage market. We hope you enjoyed last week’s edition where we talked about It’s Official: The U.S. Won’t See A Housing Bubble Crash Anytime Soon. This week we’re bringing you:

Loans in forbearance fall for the sixth straight week*

Though the pace of borrowers exiting forbearance slowed

The total number of loans in forbearance fell for the sixth week in a row to 7.74% of servicers’ portfolio volume, according to a report by the Mortgage Bankers Association. As the country braces for the end of moratoriums and unemployment benefits under the CARES Act, the MBA estimates 3.9 million homeowners are in forbearance plans.

The share of mortgages in forbearance backed by Fannie Mae and Freddie Mac dropped for the seventh week in a row to 5.59% – another three-month low for the GSE’s.

According to the report, the pace of borrowers exiting forbearance slowed last week as homeowners wait for deliberation of the HEROES Act, which would grant a 60-day mortgage forbearance automatically if their mortgage became 60 days delinquent between March 13 and the day the bill was enacted.

Housing Affordability is Still a Challenge, but Improving*

The National Association of Home Builders’ (NAHB’) Housing Trends Report for the second quarter of 2020 found slightly less than a quarter of prospective homebuyers could afford a median-priced home in their local markets, leaving 77 percent shut out. However, Rose Quint, writing in NAHB’s Eye on Housing blog, calls that an improvement from a year ago when only 20 percent could buy. She says that lower interest rates are responsible for the change. 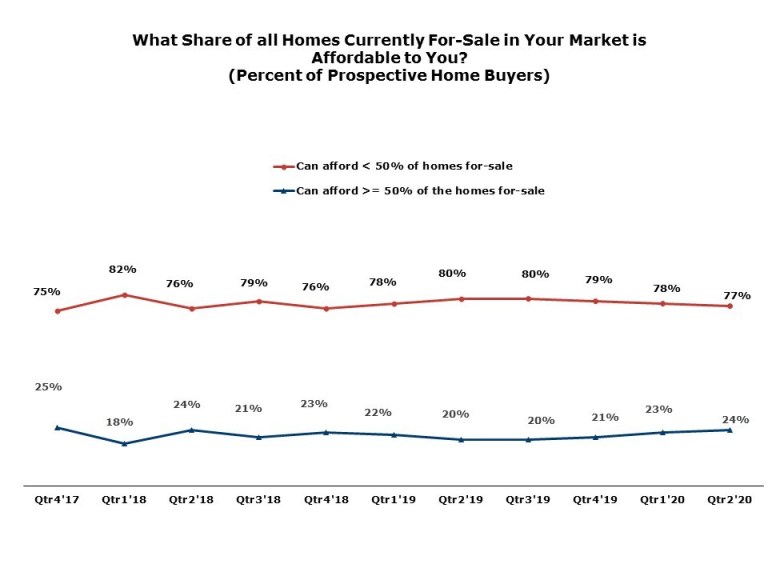 Record-low interest rates are helping home buyers lock in years of savings on future mortgage payments. But those searching for larger homes or inexpensive markets aren’t reaping the same rewards.

Rates were under pressure overnight with 10yr hitting the highest yields in more than 2 weeks. Since then, bonds have surged back into the stronger territory but remain more or less blocked by the same old floor.

Change in data-collection methods because of COVID-19 may have influenced results, Census Bureau says

The U.S. homeownership rate soared to an almost 12-year high in the second quarter as low-interest rates allowed more Americans to qualify for mortgages.

The homeownership rate jumped to 67.9%, the highest since 2008’s third quarter, from 65.3% in the prior quarter, the Census Bureau said on Tuesday. The reported noted a change in methodology that could have impacted the numbers: Because of the COVID-19 pandemic, in-person interviews were suspended and most of the survey was conducted by telephone, the release said.

The homeownership rate for Black Americans rose to 47%, the highest since 2008, from 44%, the report said. A year ago, the rate for Black families was the lowest ever recorded.