Home » News » Are We Seeing A Cash-Out Refinance Crisis?

Are We Seeing A Cash-Out Refinance Crisis?

Welcome back to iLeads Mortgage Market Minute, where we bring you the latest, most relevant news regarding the mortgage market. We hope you enjoyed last week’s edition where we talked about Spring Housing Market Forecast: Record Purchase Volume. This week we’re bringing you:

What happens when borrowers can’t or won’t walk into a lending branch? HousingWire recently sat down with Insellerate CEO Josh Friend to discuss that very question and what strategies retail lenders should look to adopt from direct-to-consumer lending.

HW: What are some strategies that retail lenders should look at adopting from direct-to-consumer lending?

Josh Friend: Amid this global pandemic, mortgage rates have been at historically low levels, borrower demand has increased, refi’s have broken records and lenders have had to shift in many instances to a remote workforce. In addition to moving to a remote workforce, most face-to-face interaction with borrowers has either not been allowed to occur or the borrower’s willingness to meet has declined dramatically. That has caused a significant shift to a digital lending model that has significantly impacted a lender’s ability to do business during these challenging times.

Record low-interest rates have driven U.S. home sales to a 14-year high and spurred a 200% annual increase in refinancing. While this boom in volume has generally been positive for primary mortgage originators, it has also exposed underlying weaknesses in their digital strategies that could create challenges down the road. According to the J.D. Power 2020 U.S. Primary Mortgage Origination Satisfaction Study, mortgage originators’ shortcomings in self-service tools for application and approvals, frequent communication and extended loan processing times could negatively affect customer satisfaction over time.

These elevated levels of origination during a global pandemic have forced lenders to embrace technologies that allow them to operate remotely while finding ways to engage borrowers. What has begun to emerge is a hybrid digital lending model that converges principles of consumer direct and retail lending. Let’s start with what these traditional models look like.

Consumer direct lending is a method for lenders to originate loans through an online experience for completing the entire loan process digitally. Typically these loan originators rely on lead sources, call centers, and other marketing activity to drive inbound leads to their consumer direct loan officers.

A study by ApartmentList has identified a new category of workers, arising, at least in part, out of the pandemic. Lynn Pollack, writing in GlobeSt, says this “untethered class” hold remote types of jobs and have little reason to stay put.

They have a median age of 32 and are “on the precipice of settling down.” They are currently renting, living alone or with a similarly untethered partner, have no school-aged children and are likely to live in a state other than where they were born. ApartmentList suggests that there may be 8.7 million untethered workers, constituting 5.6 percent of the American workforce.

Pollock quotes housing economist Chris Salviati who says in the report, “Given that so many untethered workers are living in the nation’s most expensive housing markets, many may choose to relocate to markets where they can afford to purchase homes and raise families more comfortably. While such a trend would be unlikely to lead to the demise of superstar cities, it has significant potential to reshape the markets that the untethered class moves to.”

ApartmentList estimates that about one third of the country’s jobs can be performed remotely, but the number is much higher in areas like Silicon Valley, where percent 46 percent of jobs are “remote friendly.”

“Many Americans who worked in offices before the pandemic are likely to continue working remotely even after it subsides,” Salviati writes. “By severing the link between job choice and housing choice, remote work could have a profound impact on where Americans choose to live.”

It is unclear how employers will react once the pandemic wanes and physical presence in the workplace becomes more reasonable. Some occupations such as banking will encounter regulatory challenges to remote working while others, Pollock cites media, may already be near a saturation point.

With lumber prices and other building material costs still at record-high levels, homebuilder confidence fell two points in March, per the latest report from the National Association of Home Builders.

That drop in builder confidence is in spite of sky-high buyer demand, which hasn’t waned despite rising home prices and climbing mortgage rates – the latter up 30 basis points from February.

The COVID-19 pandemic shut down a large swath of lumber mills in early 2020, handcuffing homebuilding crews all over the country and forcing home prices upward. NAHB Chairman Chuck Fowke noted that supply shortages and high demand have caused lumber prices to jump “about 200%” since April 2020.

“The elevated price of lumber is adding approximately $24,000 to the price of a new home,” Fowke said. “Though builders continue to see strong buyer traffic, recent increases for material costs and delivery times, particularly for softwood lumber, have depressed builder sentiment this month. Policymakers must address building material supply chain issues to help the economy sustain solid growth in 2021.”

A Homesnap report said total new listings increased only .22% in December, while total sales increased 19.29%. And Zillow’s Producer Price Index – a measure of the average sell prices that domestic producers of products receive – found February’s 2.8% annual increase was the strongest since October 2018, meaning that while homes are being snatched up, building material inventory, including lumber, will remain low and expensive.

Mortgage forbearance ticks down to 5.14%*

The industry is now less than two weeks away from the one-year anniversary of the CARES Act, which provided borrowers with federally backed mortgages the option to receive forbearance for up to 180 days.

After many extensions and exits, the Mortgage Bankers Association estimates 2.6 million homeowners are still in some form of forbearance, though that number continues to slowly fall. As of March 7, servicers’ forbearance portfolio volume sits at 5.14% – down six basis points from the week prior.

Overall, forbearance share managed to drop or go unchanged in every loan type for the first week of march, with Fannie Mae and Freddie Mac once again boasting the smallest share after servicers’ portfolios declined six basis points to 2.88%.

Ginnie Mae loans in forbearance experienced the greatest drop, down 12 basis points to 7.16%, while the forbearance share for portfolio loans and private-label securities (PLS) remained unchanged relative to the prior week at 9.05%.

One year after the onset of the pandemic, many homeowners are approaching 12 months in their forbearance plan. That’s likely why servicers’ call volumes hit its highest peak since April 2020, and forbearance exits increased to the highest level since January, said Mike Fratantoni, MBA’s senior vice president and chief economist.

Are we seeing a cash-out refinance crisis?*

I hear a lot of chatter about a boom in cash-out refinances, and the presumption seems to be that this is destined to wreak havoc on the housing market and the economy at some point. Cash-out loans have been growing over the past few years and it is also true that we have a recent history of excessive equity extraction factoring in a bust in housing. But there are several critical reasons why the recent uptick in cash-out refinancing is nothing like the cash-out boom of the early to mid-2000s.

First, the refinance boom’s main driver in the 2000s was unhealthy because of the marketplace’s speculative unhealthy lending standards. Home prices were growing at an unsustainable level from 2002-2005, leading to some excess risk-taking on inadequate loan debt structures.

In the 2020 market, on the other hand, refinances were not driven just by an increase in equity but lower mortgage rates. Cash-out loan borrowers who increased their loan balances could get a more favorable rate than in previous years. Although mortgage refinance activity was the highest in 2020 than it has been since 2003, the reasons for refinancing and the quality of the equity loans are much different than they were in the 2000s.

The graph below is from an article by Len Kiefer of Freddie Mac. This is an excellent article for those interested in diving into the minutiae of the 2020 refinance market. 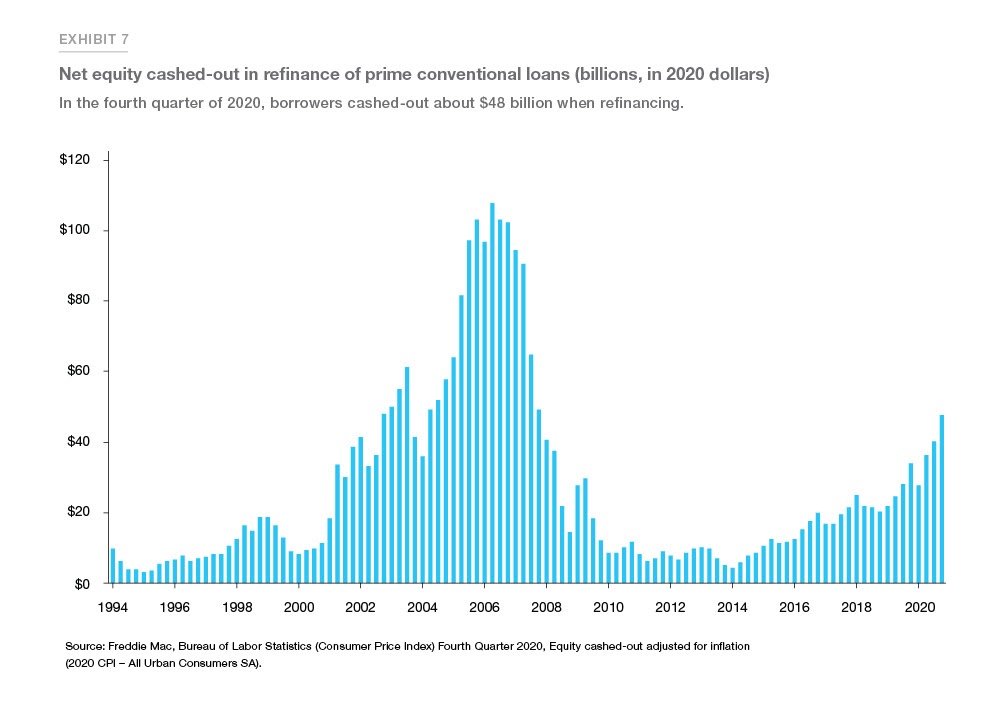