Home » News » Are baby boomers to blame for the lack of housing inventory?

Are baby boomers to blame for the lack of housing inventory?

For once, it’s not the millennials‘ fault.

Existing-home sales are on pace to fall 2.3% year-over-year in 2018, and the baby boomer generation is a big reason why, according to Fannie Mae Chief Economist Doug Duncan. 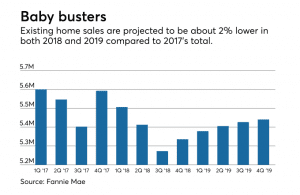 Housing supply has been an ongoing challenge in the residential real estate market and unfortunately, the industry can’t just build its way out of the problem. In addition to shortages of labor and land in areas desirable by first-time homebuyers, builders face increased costs from tariffs on lumber and steel and local land development expenses — all of which are making the construction sector less efficient.

It’s also resulted in builders needing to make more expensive entry-level houses than before to turn a profit. Builders catered to those who could afford it and the low end of the market suffered.

“Our data would suggest relative to demographics, we should be producing somewhere between 200,000 and 300,000 more combined apartments and single-family homes annually than we are,” said Duncan. “The supply of existing homes has flattened over the last two or three months. At the low end, there’s still a shortage of supply.”

While boomers are hampering the existing home sales market, they are keeping the mortgage refinance business afloat in the face of climbing interest rates.

“The boomers have been driving the remodeling business. Rates have risen, refinancing volume has fallen, but the share of the remaining refinances which are for cash-out has been rising,” Duncan explained.

“What’s likely to happen now that rates have risen as much as they have, is there will be growth in the home equity loan and lines-of-credit business,” he said. “Because people will not be willing to make the trade up in the cost of their total mortgage, they’ll hold onto the first mortgage because it’s a lower rate and they’ll take out a home equity loan or line of credit on top of that. Lenders are now seeing that change.”

The economy’s been growing and is anticipated to continue doing so through 2019. The change lenders are seeing could turn into a trend if the Federal Reserve keeps raising rates as expected.

“We think the market has finally realized the economy is doing pretty well,” said Duncan. “We think the Fed is going to raise rates. They’ll raise in December. We’ve got them to raise them again in March and June of next year. If you look at the Fed’s dot plot, it suggests they’ll raise four times next year and maybe even once in 2020.”