Home » News » Do Higher Mortgage Rates Mark The End of the Refi Wave?

Do Higher Mortgage Rates Mark The End of the Refi Wave?

Welcome back to iLeads Mortgage Market Minute, where we bring you the latest, most relevant news regarding the mortgage market. We hope you enjoyed last week’s edition where we talked about How To Survive This “Unprecedented” Era Of Digital Mortgage. This week we’re bringing you:

How servicers can stay ahead of Biden’s potential regulatory changes*

As we move further into 2021, servicers continue to face the ongoing effects of forbearance and foreclosure moratoriums while also anticipating the changes that may take place as a result of the new administration in Washington.

Among these unknowns are changes that could affect lender-placed insurance (LPI). Servicers must have the flexibilities in place to keep up with the latest changes to remain compliant and efficient while still providing an optimal borrower experience.

The LPI process is governed by state and federal laws and regulations, as well as investor, guarantor and insurer guidelines. On the hazard insurance side, the Consumer Financial Protection Bureau’s (CFPB) Regulation X provides strict requirements on how servicers must communicate to the borrower when the servicer determines that the borrower’s insurance lapsed or was canceled, as well as how to refund a borrower’s escrow account in the event that LPI must be canceled.

Similarly, flood insurance is highly regulated by federal agencies, including the Office of the Comptroller of the Currency (OCC), FDIC, NCUA, Board of Governors and Farm Credit Administration (“Federal Regulators”). Beyond the laws and regulations, government sponsored entities (GSEs), FHA, USDA and other agencies that provide loan insurance and guarantees add an additional layer of complexity with servicing requirements that go above and beyond those required by federal and state regulators.

The Urban Institute (UI) says the surge in foreclosures predicted as the COVID-19 pandemic drove unemployment to the highest level since the Great Depression may not materialize, even when the current forbearances end. Two UI researchers, Michael Neal and Laurie Goodman, say that even vulnerable homeowners may be spared, and they think they have identified the reasons. 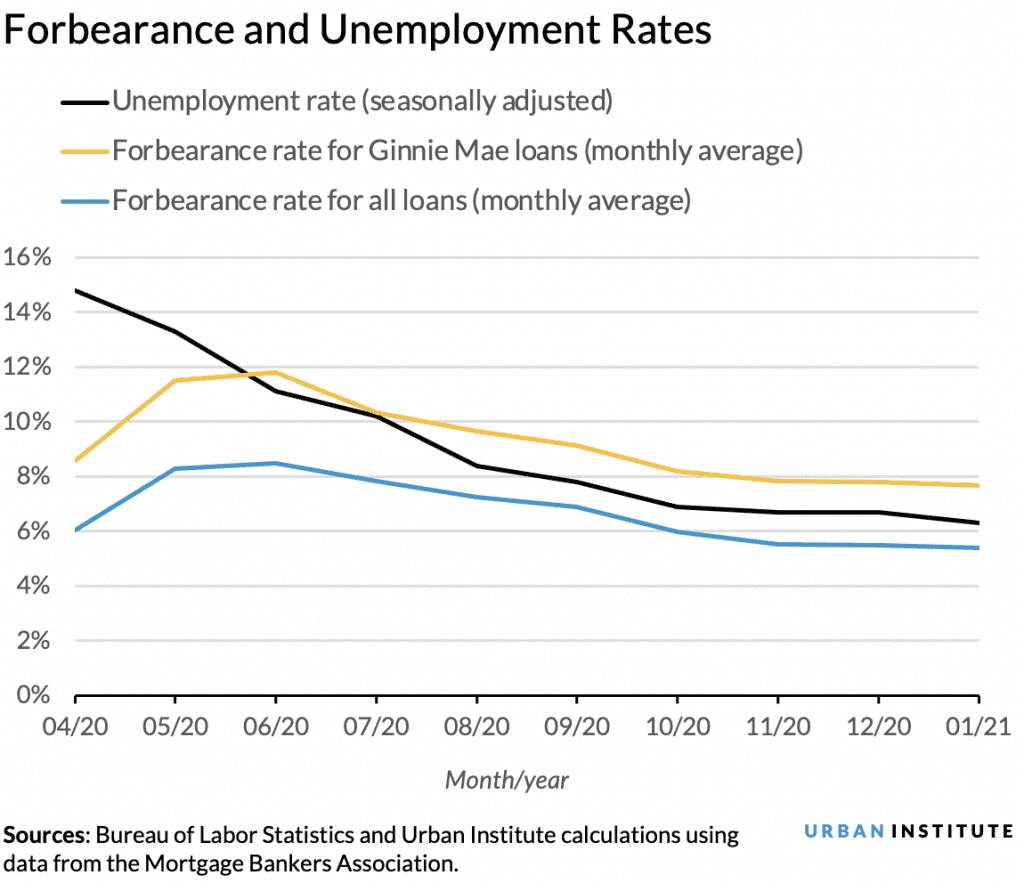 Both the S&P CoreLogic Case-Shiller and The Federal Housing Finance Agency (FHFA) report that the country ended the year with more than a 10 percent annual increase in home prices. The Case-Shiller U.S. National Home Price Index, which covers all nine U.S. census divisions, showed a year-over-year gain of 10.4 percent in December while FHFA put the increase at 11.4 percent.

The Case-Shiller National index showed significant acceleration in appreciation from the 9.5 percent reflected in its November report for the prior 12 months. The 10-City and 20-City appreciation was also faster than in November at 9.8 percent and 10.1 percent compared to 8.9 percent and 9.2 percent, respectively.

Phoenix, Seattle, and San Diego again had the greatest growth among the cities tracked. Phoenix led the way for the 19th month with a 14.4 percent year-over-year price increase, followed by Seattle, up 13.6 percent increase and San Diego with a 13.0 percent gain. Detroit continues to have insufficient transaction data available due to residual problems from earlier pandemic related office closures so only 19 cities are included in the indices. Eighteen of the 19 reported higher price increases in the year ending December 2020 versus the year ending November 2020.

The National Association of Realtors reported that existing home sales for January were at 6,669,000, which beat estimates. The year-over-year growth was an impressive 23.7%. The median sales price also jumped 14.1% year over year, which I warned could happen during the years 2020-2024. On a recent HousingWire podcast, I discussed the need for higher mortgage rates to cool down this growth rate. 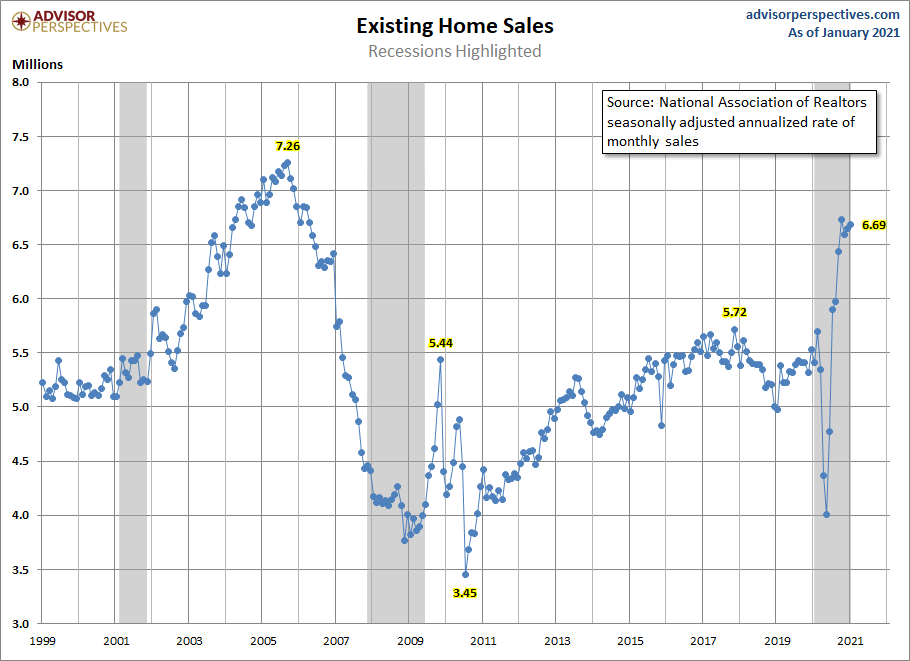 Currently, the 10-year yield is 1.35%, which is now above a critical level that I have talked about for some time. We should all be jumping for joy as the bond market shows the American bears that America is back. Mortgage rates should also creep higher. When the 10-year yield gets into the range of 1.33%-1.60%, we will have achieved our goal for the “America is Back” economic model that I proposed last year, which I believe could only happen in 2021.

With the yield in that range, we can expect the mortgage rate to move up toward 3.375%. We still have a lot of work to do to earn the right to create this range in the bond market; the first would be hitting 1.60%, which we haven’t yet. The chart below shows the 10-year yield as of the close of Thursday. Today, bonds are selling off and yields are higher.

The volume of mortgage applications for both home purchase and refinancing fell for the third straight time during the week ended February 19. The Mortgage Bankers Association (MBA) says its Market Composite Index, a measure of that volume, dropped 11.4 percent on a seasonally adjusted basis. It was the largest single week decline since the week ended April 3, 2020. On an unadjusted basis the index was down 10.0 percent.

The Refinancing Index decreased 11 percent from the previous week but was still 50 percent higher than the same week one year ago. The refinance share of mortgage activity decreased to 68.5 percent of total applications from 69.3 percent the previous week.

The seasonally adjusted Purchase Index dropped 12 percent and was 8 percent lower before adjustment. Activity was 7 percent higher than the same week one year ago.

Do higher mortgage rates mark the end of the refi wave?*

We may never again see a year like 2020. That’s somewhat somber news for the lenders who benefited from a series of downright strange conditions and record low mortgage rates to generate more refi business than anyone in March could have imagined.

Both Fannie Mae and Freddie Mac reported that refis made up about 70% of their mortgage activity in 2020, driven by weeks upon weeks of record low mortgage rates.

However, despite a rise in overall mortgage applications over the last week, the Mortgage Bankers Association reported that refinance activity waned with rising rates. As of Monday, the average 30-year fixed refinance climbed to 3.07%, well above Freddie Mac’s PMMS low of 2.65% in January.

“There’s a lot of floating loans out there, and those pipelines are going to get hit if rates keep on going up,” said HousingWire lead analyst Logan Mohtashami.

At the current rate, the MBA expects rates to exceed 3% by the second quarter of 2021, and by 2023 forecasts rates higher than 4%.

A one-eighth to a quarter turn in mortgage rates (high or low) can move the market substantially, Mohtashami noted. Even the 50 bps adverse market fee that some industry experts labeled as “unwarranted” back in December didn’t put an end to the refi wave like fluctuating rates could.

“There are people who had a 4.00% rate that refinanced to 3.25% and then said, ‘Oh well now that rates are low, I’ll refinance again to 2.75%.’ But if that rate sneaks up a quarter it’s no longer ideal and it’s lost its appeal. They are going to wait for it to come back down, right? And then it doesn’t,” Mohtashami said.